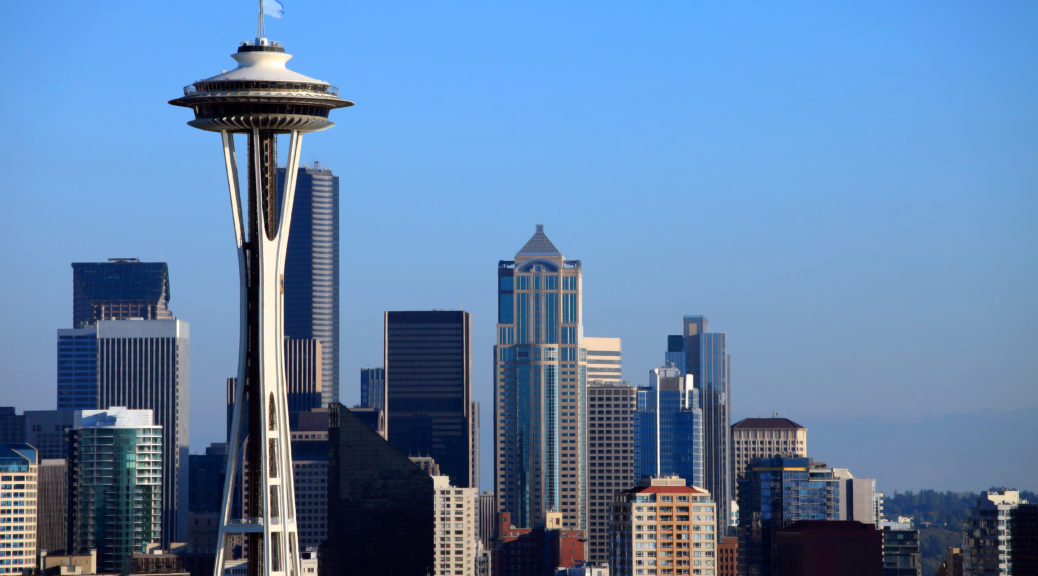 Washington is bounded by the Pacific Ocean to the west; Oregon to the south (the Columbia River forming most of this border); Idaho to the east; and British Columbia, Canada to the north. It is famous for scenery of breathtaking beauty and sharp contrasts. High mountains rise above evergreen forests and sparkling coastal waters. Its coastal location and Puget Sound harbors give it a leading role in trade with Alaska, Canada, and the Pacific Rim. Puget Sound’s many islands are served by the largest ferry fleet in the United States. Washington is a land of contrasts. The deep forests of the Olympic Peninsula are among the rainiest places in the world and the only rainforests (such as the Hoh Rain Forest) in the continental United States, but the flat semi- desert that lies east of the Cascade Range stretches for long distances without a single tree. Snow-covered peaks tower above the foothills and lowlands around them. Mount Rainier, the highest mountain in the state, appears to “float” on the horizon southeast of Seattle and Tacoma on clear days. The eastern side of the state can be divided into two regions: the Okanogan Highlands and the Columbia River Basin.

The Washington State Department of Health’s Genetic Services Section provides genetic education, supports genetic services via Regional Genetics Clinics throughout the state, coordinates the Early Hearing Loss, Detection, Diagnosis, and Intervention Program, and facilitates discussion about genetics with the public. Regional Genetics Clinics are held at thirteen sites around Washington state and are staffed by geneticists and genetic counselors. In 1997 the Washington State Department of Health recruited a diverse group of stakeholders to comprise a Genetics Education Steering Committee. As part of this effort, research and public hearings were conducted by EvansGroup, who used the information gathered to draft a plan for delivering well coordinated and comprehensive genetics education to Washingtonians over the next three to five years. The plan is intended to be a living document, designed for implementation and revision as needed, to reflect new understanding in a changing environment.

Some of the many health programs in Washington are:

For more information about newborn screening and genetic services in Washington, please contact us.